Fork me on GitHub

We purchased the Adafruit Ultimate GPS breakout board (Figure 1) several months ago, but finally got to the point of using it for something. This GPS breakout uses a GlobalTop MTK3339 GPS chip, comes with an SMA connector antenna, and also requires an SMA to uFL adapter (Figure 2) also available at Adafruit. You will also require an FTDI USB-to-TTL serial cable, which can be available at various vendors like Sparkfun, Adafruit, Amazon, DigiKey, etc.

To read the GPS data as fast as possible using the libev event API, we chose to write a C library from scratch as opposed to using a server like gpsd. We want our application to embed the reading of the GPS and display the GPS data to the OLED library using our libssd1306 library. 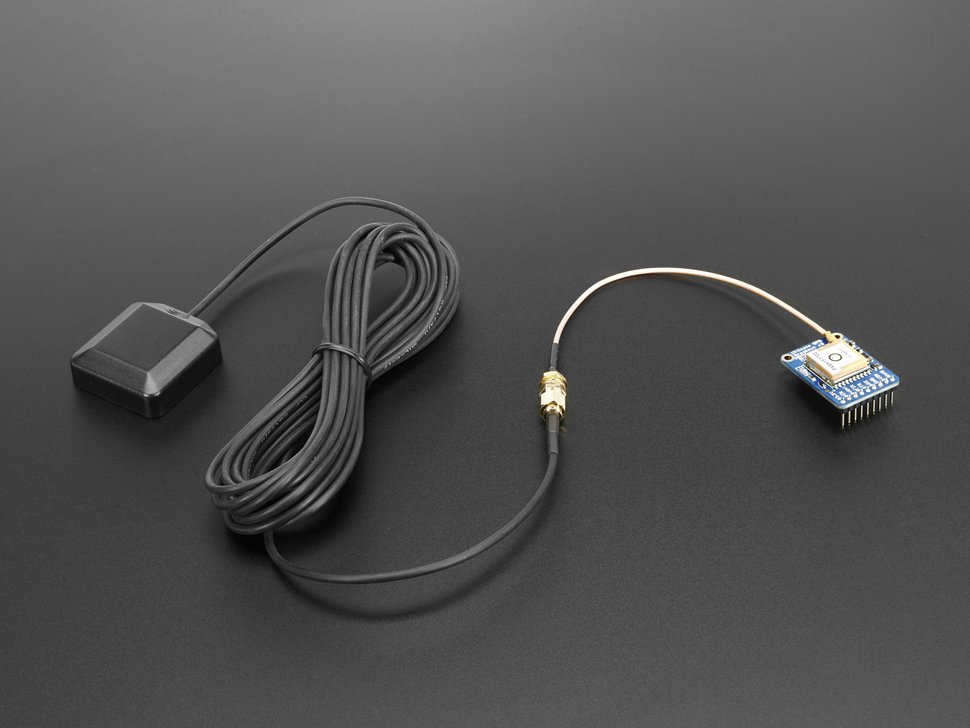 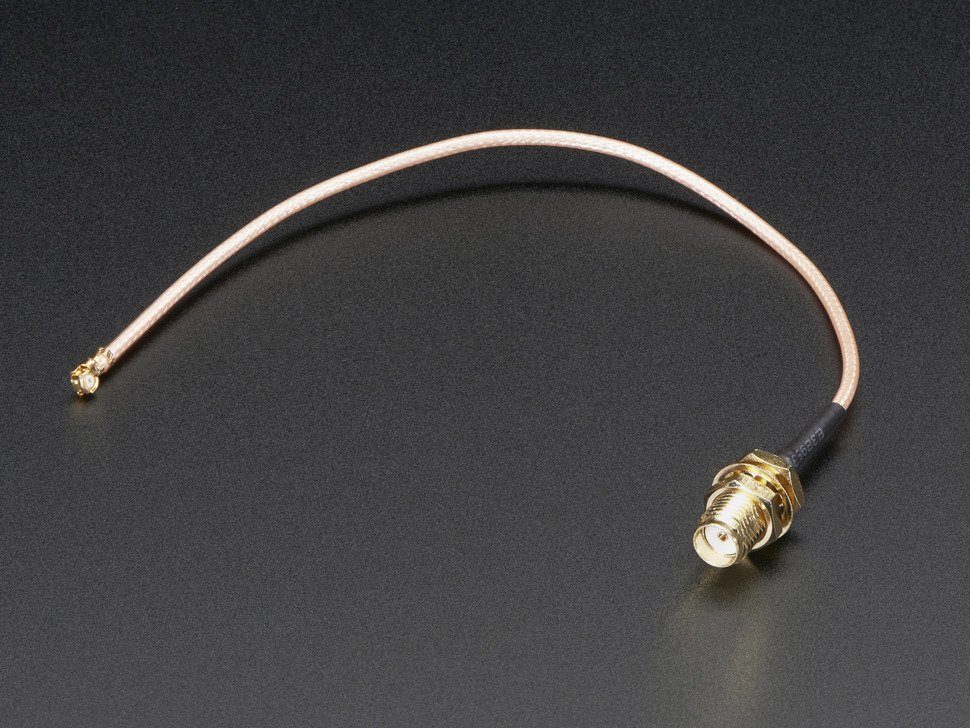 The datasheets for the GPS chip (version PA6H) on the breakout board (version 3) can be found at Adafruit’s website and we have mirrored it here.

The GPS chip also accepts custom commands that start with the string $PMTK and the details of the commands can be found at Adafruit and we have mirrored it here.

CONNECTING THE GPS BREAKOUT BOARD

The easiest way to connect and test the GPS breakout board is by using the FTDI USB-to-TTL serial cable.

Connecting the cable has to be done using the wiring in Figure 3.

Figure 3. How to connect the FTDI USB-to-TTL Cable Connector to the Ultimate GPS Breakout board © Adafruit Industries

You will need some extra connecting wires to be able to connect the USB-to-TTL cable’s connectors to the GPS breakout board’s connecting pins.

If you want to directly connect the GPS breakout board to a Raspberry Pi or Beaglebone Black UART GPIO pins, you have to perform the wiring as in Figure 4. 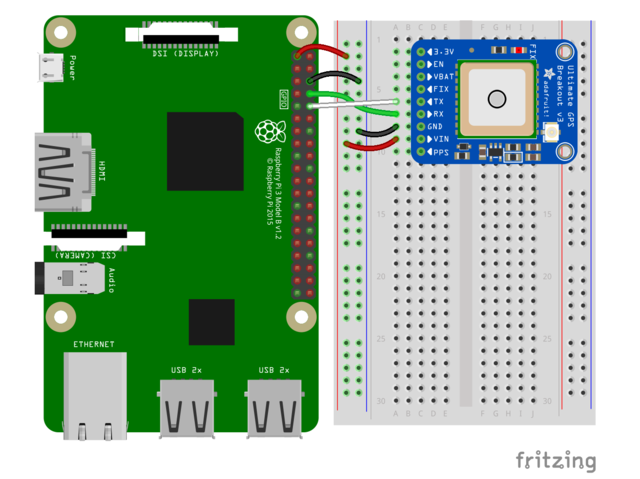 Figure 4. How to connect the UART GPIO Pins on a Raspberry Pi to the Ultimate GPS Breakout board © Adafruit Industries

We have made it as simple as possible to compile the library.

This library’s main purpose is to be able to seamlessly, and with the least amount of effort, be able to read data from the MTK3339 GPS chip made by GlobalTop. Here for example, we are using the open source AdaFruit Ultimate GPS breakout board, but you could be using your own custom board with this chip and want to read the data faster than a Python script could.

That is why we have written this parser using one of the best parser generator tools, ragel, so that we can parse each individual NMEA sentence sent by the GPS in under 6-10 microseconds depending on the client computer.

The library is also re-entrant so that the user can use event libraries like libev or just a select() or epoll() or a blocking read() function call to read the data from the GPS chip when connected in any of the above two ways, shown in Figures 3 and 4. One such example we explain below.

We provide a usable example that prints location information on screen using libev. This example can be found in src/libev_uart.c file. In this section, we go over some important portions of the code to help the user understand how to use the library.

To run the example, you can do the following after compiling the code:

This expects the device to be connected as /dev/ttyUSB0. You can also specify your own device path on the command line:

This example automatically exits after 10 seconds. However, sometimes the GPS chip may take more than 10 seconds to get a fix, so you can set the example to run without the timeout by setting the NO_TIMEOUT environment variable as shown below. You can then press Ctrl C to interrupt the running application.

The user only needs to include the gpsdata.h header file which indirectly includes all the other dependency files such as:

For this example, the user needs to also include ev.h to use libev.

The gpsutils.h file defines a set of macros for performing conditional logging at various levels. By default, the logging happens to stderr. The default log level is set to INFO and the user can change it using the GPSUTILS_LOGLEVEL_SET() macro as shown below.

The user can also either reopen the stderr to a different log file using freopen(), or perform the following C-language macro-magic to set it to their favorite global FILE * variable, which they can set up later. NOTE: we do not do this in the src/libev_uart.c file, and this is for a special use case where the user cannot use freopen() on stderr.

When using the USB-to-TTL cable on a Linux system, the device will show up as /dev/ttyUSB0 or in the device file format /dev/ttyUSB[0-9]. The src/libev_uart.c file assumes that the /dev/ttyUSB0 is the default, but also accepts a command-line argument to change that default to another device path.

When using the UART GPIO pins on a Raspberry Pi, the device path changes to /dev/serial or matches the /dev/serial[0-9] pattern.

To open the device, we provide a wrapper function that also sets the default chip baud rate to 9600 bps and the default NMEA sentences to GPRMC and GPGGA. This function is the gpsdevice_open() function and it returns the file descriptor after a successful open, or -1 on error. There is a corresponding gpsdevice_close() function that closes the open device. Below is a small snippet of code from the src/libev_uart.c file demonstrating the usage of these functions. We open the device in non-blocking mode so that we can read the data as fast as possible, but also handle other events when the data is not coming in.

This library uses ragel, which is a streaming parser that uses state machines to parse data. It allows us to parse data read from the GPS chip, even if the data is incomplete in the buffer until the next buffer can be read. Not only that, it is also written in pure C which allows it to be really fast for our needs.

We encapsulate all the parser related code into an opaque object called gpsdata_parser_t and the user can create one using gpsdata_parser_create(). Each device must have its own gpsdata_parser_t object, as each file descriptor will be reading data which may be at a different state. In general, it is likely that you will be using only one GPS chip, but if you are using more, you need to have one parser object per GPS chip.

Once an array of bytes have been read from the GPS chip’s file descriptor, the function that parses it is gpsdata_parser_parse() which then returns a linked list of gpsdata_data_t objects which may have location information, antenna information, speed information, GPS chip firmware information and other possible messages.

The below code shows how to create the parser, and use the functions in blocking mode without libev:

Sending Messages to the GPS Device

We can also send several messages to the GPS device since it uses a UART interface for receiving data. The messages that can be sent are found in the PMTK command datasheet (also linked above).

We have taken most of the useful ones and wrapped them in their own functions, and also provide a low level message send function that allows the user to send their own custom message to the GPS device. All these functions begin with gpsdevice_ and use the file descriptor returned by gpsdevice_open() to send the messages to the GPS chip.

Using the Device with libev

The sample application present in src/libev_uart.c can be used as a starting point for using libev and the libgps_mtk3339 library. Remember to open the device in non-blocking mode and to create one parser per opened device.

With this we come to the end of the introduction to the libgps_mtk3339 library. Try it out instead of using the gpsd daemon or the Adafruit Python libraries and let us know if you have any issues.